It's been a tough week for us here at the JDHF. It is with great sadness and heavy hearts that we announce the passing of Heigl Hound of Hope Vanilla. 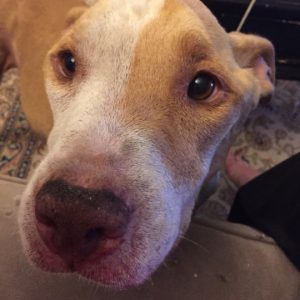 Within one week of Nilla's tail  amputation, another tumor developed on her inner thigh. It grew remarkably fast, and quickly
became ulcerated. Nilla already had an oncologist appointment scheduled at the recommended two weeks post-op. By that time, the tumor was quite large (several inches
long and a couple inches wide), and bleeding constantly. The oncologist told us that the aggressive nature of Nilla's cancer was not at all normal. Chemotherapy
seemed unlikely to be helpful. As for radiation, the oncologist estimated that Nilla probably would not survive much longer than the term of radiology: two to four
months. However, Nilla was started on several medications to try to shrink the tumor, curb the bleeding, decrease inflammation, and fight any infection. That was
Friday, October 21.

On Wednesday, October 26, Nilla ate her breakfast as normal. By the time dinner rolled around, she wouldn't eat dog food; she wouldn't eat treats; she wouldn't even take cheese. The edema on her leg had increased exponentially, causing her leg to be double its normal size, and she was clearly uncomfortable. Her foster mom started her on some I.V. fluids to try to perk her up, but they had little effect. Come Thursday morning, Nilla still refused any food. Her foster mom brought Nilla to the vet. Quick tests showed another mass in Nilla's stomach, and fluid around her liver. Nilla was now at the point of suffering. 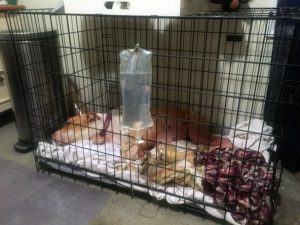 JDHF never shies away from the tough cases. Nilla initially didn't even seem to be a tough case. Her masticatory muscle myositis should have been treatable. The tumors, once removed, should have been gone. Nilla should have had some time to live a relatively normal life with her foster mom, who truly loved her and was committed to keeping Nilla as long as necessary. Nilla didn't get that chance and we are heartbroken.

Rescuing animals is not easy. If love were all it takes to heal a dog, you can bet no Heigl Hound of Hope would ever die. As we all know, sometimes love just isn't enough.

We'd like to thank you for all your support and prayers for Vanilla. She was a truly special dog, very sweet, very loving, and very strong. Everyone who met her loved her. We are sure she's on the other side of the Rainbow Bridge, cancer free with full movement of her jaw, chewing on some turkey jerky. She knows she was loved and we believe that love carried her peacefully to the other side.