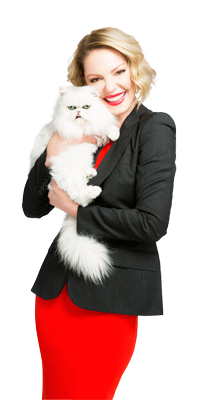 As part of the launch, Cat's Pride® is partnering with award-winning actress Katherine Heigl, best known for her roles in "Grey's Anatomy", "27 Dresses" and "Knocked Up", as the face and voice of their integrated marketing campaign.

The campaign includes TV, print, digital and radio advertising. In addition, Cat's Pride is proud to support the Jason Debus Heigl Foundation™, by donating a portion of every Fresh & Light Ultimate Care purchase to support the Foundation's animal advocacy work.

"Cat's Pride is excited to introduce consumers to our newest innovation in cat litter, Fresh & Light Ultimate Care. For 75 years, we've been committed to providing products that enrich the lives of cats and their owners," said Dan Jaffee, president and CEO of Oil-Dri, the makers of Cat's Pride. "We are proud to partner with Katherine Heigl and the Jason Debus Heigl Foundation as they work to end the needless suffering of animals."

Katherine Marie Heigl is an Emmy Award winner, two time Golden Globe nominated actress, and producer, best known for her starring roles in the feature films "The Ugly Truth", "27 Dresses" and "Knocked Up", as well as her portrayal of Dr. Isobel 'Izzie' Stevens in the television medical drama "Grey's Anatomy". Heigl will next be seen in the upcoming Warner Bros. feature "To Have and To Hold" starring opposite Rosario Dawson and directed by Denise DiNovi. In addition to her work in front of the camera, Katherine partnered with her mother and manager Nancy Heigl to form the production company Abishag in 2007. In 2008, Katherine co-founded the Jason Debus Heigl Foundation, an organization dedicated to ending animal cruelty and abuse and promoting animal welfare. Heigl is married to singer-songwriter Josh Kelley and the couple has two daughters Nancy Leigh Mi-Eun and Adalaide Marie Hope. Heigl lives in Utah, where she resides with her family, nine dogs and four cats.

About The Jason Debus Heigl Foundation™

The Jason Debus Heigl Foundation's mission is to eliminate the needless suffering inflicted on animals by human cruelty, indifference and ignorance. The Heigl family was inspired by Jason's compassion for animals and is committed to keeping his love and memory alive through acts of generosity and kindness toward animals through the Foundation's work. The Jason Debus Heigl Foundation has helped improve the lives of over 25,000 animals since its inception.

Oil-Dri Corporation of America, a leading supplier of specialty sorbent products for agricultural, horticultural, fluids purification, specialty markets, industrial and automotive, is celebrating 75 years of sorbent mineral expertise. Oil-Dri is a leading manufacturer of cat litter. "Cat's Pride" "Fresh & Light Ultimate Care" and "Changing Litter for Good" are registered trademarks of Oil-Dri Corporation of America. From research and development at our Innovation Center outside of Chicago to our manufacturing plants in Georgia, Mississippi, Illinois and California, our Cat's Pride products are proudly made in the USA.